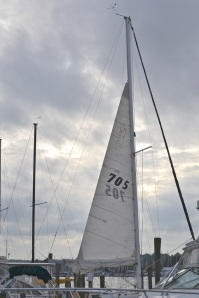 Cay of Sea with the second reef point tied in.  That takes a lot of area out of the mainsail.

When we bought Cay of Sea, I couldn’t figure out how the reefing lines were really “supposed” to work.  I managed to get the main reefed, but was never satisfied that I understood how this system was designed to work.  Slab-reefing systems are a bit different from boat to boat, but the principles of how it works stay the same.  Only the details change.  I hope this post can shed some light on someone else’s struggle to set up and use their reefing system.

My boat has two reef points in the mainsail.  They are identified by a grommet (or cringle, if you prefer) at the same relative height at opposite ends of the sail – that is, the luff and the leech. 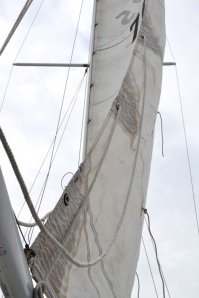 Grommets for reefing in the leach of the sail. The lowest grommet (without the line through it) is a “flattening” reef point.

You can see the two grommets in the photo above, each with a line passing through it.  The lowest grommet – the one without the line in it – is a flattening reef point (more on this later).  The lines passing through the reefing grommets lead to the end of the boom, where they actually transit inside the boom to the mast, then up to corresponding reefing points on the luff. 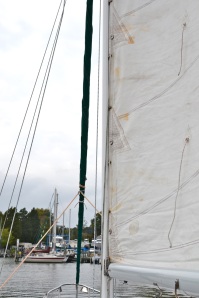 This shows a reefing line exiting the forward end of the boom and leading up to a reefing point. It passes through the grommet and comes down the other side of the sail, terminating at a cleat.

The lines are captured at the forward end of the boom by cam cleats, which prevent the reefing lines from being pulled aft.

At the other end of the boom the reefing lines are led over sheaves, then rise to the grommets on the leach and back down to cleats on the opposite side of the boom.

Reefing lines exiting the boom aft. The smaller diameter line passing through the small block shackled to the bail is the topping lift.

This next segment shows the order in which I accomplish tasks for reefing.  It also provides clarity on how the gear works.

1.  Point the boat into the wind. This makes the process easier.  Although it is not impossible to reef  with the sail full, there is a great deal of tension on the sail unless it is luffing.

2.  Release the halyard and lower the sail to the height of the reefing point.

3.  Tension the aft reefing line.  Pull the bitter end of the line taut so that it brings the grommet down to the boom.  Cleat off the line to the corresponding cleat on the boom. 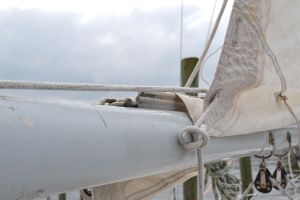 Here you can see the reefing line extending aft where it exits the boom. You can also see the line made off to the cleat after passing through the grommet. Now the leach of the sail is secured at the first reef point.

4.  Tension the forward reefing line.  Pull the bitter end of the forward line down to the cleat mounted on the mast.

The line angling up to the left is the reefing line, and it is made off to the cleat on the mast.

5.  Re-tension the halyard.  This pulls the luff of the sail taut again.  Difficult to do when the boat is not heading into the wind, but not impossible if using a sheet winch.

6.  Optional: gather excess sail under loops of mid-sail reefing lines.  Make sure these lines are NOT tightly tensioned.  In fact, they should be loose.  Any tension applied to these lines may result in tearing the sail.  I almost never do this.  It’s not necessary.  I don’t want the risk of tying the lines too tightly either. 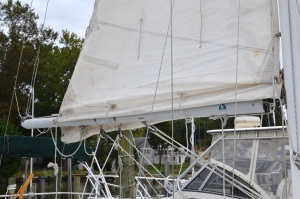 This photo shows the whole boom with reefed sail. Note the loosely gathered middle of the sail under mid-sail reefing lines.

Technically, this is a “single line” reefing system, but I use it as a dual line system – that is, I have to set each end of the line manually.  It is possible to rig the lines in such a way as to pull down both luff and leach in one motion by pulling on one end of the line.  In order for this to work, friction has to be all but eliminated from the system.  As I assessed my reefing system, I realized that this could be accomplished only by spending a fair amount of money on extra turning blocks and cleats (or clutches) and perhaps winches.  I chose to leave it as a double-ended system.  Reefing this way takes slightly longer, and I have to leave the cockpit to secure the luff.  This doesn’t bother me:  There are plenty of hand-holds and it only takes a minute.

The reefing cleats at the end of the boom are attached slightly aft of the corresponding grommet.  This is enables the sail to be pulled nearly flat at the foot, if desired – important if you are trying to de-power the sails.

The “flattening” grommets shown in the second photo would allow me to take fullness out of the sail, and let the top twist off in stronger puffs.  I haven’t used it yet, and probably won’t – by the time I need that, I’m just ready to tuck in the first regular reefing point.

Finally, you may have noticed that I use the cleats on the mast for several lines.  This inconvenient and less effective than one-cleat-per-line.  So, I need to add a couple of cleats to the mast.